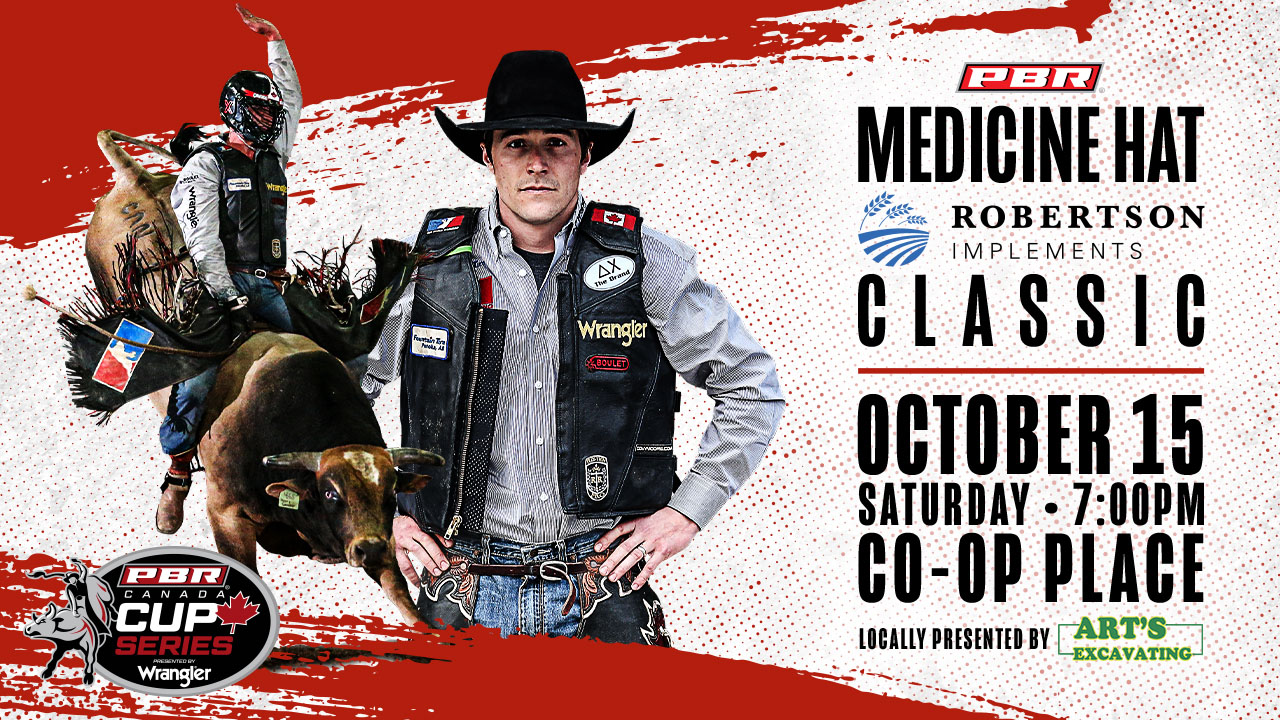 PBR Canada’s Cup Series regularly features Canada’s best riders alongside some of the league’s top international athletes, squaring off against the rankest bucking bulls from across the nation.

For one night only, fans will witness exhilarating 8-second rides and wrecks throughout the action-packed event as the PBR’s courageous bull-riding athletes face off against their 2,000-pound opponents.

The PBR Robertson Implements Classic, presented by Art’s Excavating will mark the seventh event of the 2022 PBR Canada Cup Series, presented by Wrangler. The tour will launch on April 23 in Winnipeg, Manitoba, and travelling across Alberta and Saskatchewan prior to arriving in Medicine Hat.

PBR Canada’s elite Cup Series, presented by Wrangler debuted in Medicine Hat in 2021, when two-time PBR Canada Champion Zane Lambert (Ponoka, Alberta) went a perfect 2-for-2 to win the tour stop and surge to No. 2 in the national standings.

Lambert, began his outing inside Co-op Place in successful fashion, recording the sixth-best score of Round 1 when he covered Bob Rock (Skori Bucking Bulls) for 83 points.

The qualified ride avenged Lambert’s lone buckoff from his victory in Lethbridge, Alberta, earlier that season, when the Skori Bucking Bulls’ bovine athlete got the better of him in a swift 1.84 seconds during Round 2 inside ENMAX Centre.

In the championship round bull draft on Saturday night, Lambert once again elected to go head-to-head against a familiar opponent, drafting Lil’ Hooch (Flying High Rodeo Co.). The Ponoka-native covered the bull for 87.5 points in mid-August en route to a runner-up finish at the Touring Pro Division event in Coronation, Alberta.

Fast forward three months, and Lambert once again made the requisite 8, this time marked a championship round-best, and event victory-clinching, 86.5 points.

Lambert’s flawless finish earned him a crucial 68 national points. After travelling to Medicine Hat ranked No. 4 in the nation, the 35-year-old surged to No. 2 in the race for the 2021 PBR Canada Championship.

While Lambert remained atop the national standings for the remainder of the season, he was narrowly edged by Cody Coverchuk (Meadow Lake, Saskatchewan) and Dakota Buttar (Kindersley, Saskatchewan) for the year-end honor.

After a dominant season, including four event wins across all levels of competition and a victory in one of the division’s special 5/5 Bucking Battles, Buttar entered the 2021 PBR Canada National Finals with a firm grip on the No. 1 ranking in the race for the 2021 PBR Canada Championship, and accompanying $50,000 bonus.

However, a groin injury initially sustained at the final regular-season event of the year proved too much for Buttar to battle, inevitably sidelining him from competition the last day of the campaign.

With the title decided on the final outs of the year, 2018 PBR Canada Champion Coverchuk mounted an incredible come-from-behind surge, erasing Buttar’s 53.66-point lead, to conclude the year No. 1 in the nation, capturing his second career national championship.

The Saskatchewan contender clinched the title, and his share of the record $175,000 purse paid out at the year-end event, with an impressive 89.5-point ride aboard annual PBR Canada Bull of the Year contender Finning Lil Shorty (Flying Four Bucking Bulls).